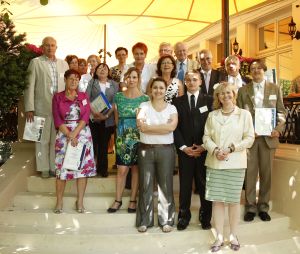 The laureates with members of the FSLD team

On 19th  June the conference closing the Fifth Edition of the Annual FSLD Award for Local Cultural Initiatives took place in Warsaw. Our Foundation honours local governments units, NGOs, public cultural institutions and individuals for their actions in the field of culture.

We received in total156 candidatures from all Polish voivodeships.  Awards and honourable mentions were granted in four categories. The winners were:

Local government units – Stronie Śląskie Municipality (for establishing the Centre of Education, Culture and Tourism in the former railway station)

Individuals – Magdalena Kowalska (for the “Gardens of Art. Street Festival”), Michał Wylaź (for the “Multimedia Chamber of Tradition in Garbów”)

This year financial awards were provided by our magnificent partners: Orange Foundation, BRE bank Foundation and the National Centre of Culture.